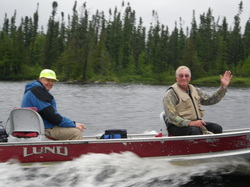 Take a close look at a walleye's mouth and its teeth tell the story - they have evolved to feed on fish. Yet, walleye don't survive on fish alone. Ever the opportunists, these marble-eyed predators will snatch up meals whenever they get the chance, and there are few underwater appetizers as easy for them to eat as mayfly nymphs.

Mayfly nymphs are more than simple snacks for walleye. They're a main component in walleye diets at certain times of the year. In the spring, gluttonous post-spawn walleye will cruise soft-bottom areas feeding on nymphs and in the summer walleye will target emerging nymphs during a hatch. To effectively catch walleye feeding on nymphs, anglers need to understand the predator-prey relationship between these two species. This includes where to locate nymph-eating 'eyes and downsizing lures to imitate these immature mayfly morsels.

The life cycle of mayflies is egg to nymph, followed by nymph to adult. A mayfly spends the majority of its life as a nymph, also called larva. Classified as benthic (bottom dwelling) invertebrates, nymphs crawl along the bottom, hiding in debris and vegetation while some create burrows. Flats and bays with soft mud or silt bottoms are prime nymph habitat. Some nymphs live in deep water, but most stay shallow to soak up sun which is crucial for their growth.

In spring, maturing nymphs become active as they prepare to emerge from the water. Once conditions are right, mature nymphs swim to the surface or crawl on land, shedding their casings and molting into winged adults. As adults their lifespan is relatively short, with their sole purpose to mate before dying. As with any migration in nature, increased activity and concentrated numbers of organisms will attract predators. The mayfly-walleye relationship is no different.

"Primarily the time of year when a fish like walleye zeros in on mayfly nymphs is the early to late spring period when the organisms are emerging from the mud in fairly concentrated areas, especially the types that burrow into the substrate," says the experts.

Given their post-spawn predisposition to binge-feeding, catching walleye targeting mayfly nymphs can be easy - if you know where to look. The first step is finding soft-bottomed flats comprised of mud, sand and silt that hold mayfly nymphs. My sonar displays soft-bottom areas as a thin line as mud or silt absorbs and scatters the sonar's signals.

Once you've found some soft-bottom areas, fish those that are close to spawning areas first, as these spots are natural transition zones and resting points for recovering fish. Also consider the light preferences of walleye. Shaded flats or ones containing weeds and wood will hold walleye better than ones in sunlight and void of cover.

Small 1/16 or 1/8-ounce jigs in both dark and light colours can be deadly when walleye feed on nymphs during early spring. Try to make jigs mimic a nymph's erratic movements during the retrieve. If casting, slowly crawl or subtly hop it along bottom. If vertical jigging, thump the jig in place to kick up debris. This tactic appeals to a walleye's curiosity and can trigger hits.

Walleye often suck-in nymphs and hits can be subtle. Stay focused on watching your line for the slightest twitch indicating that a walleye has sucked in your bait. You need to set the hook immediately or the fish will blow the bait back out. You will often find that tipping the jig with a small piece of worm will entice more bites and gives you more time to set the hook, as the fish hangs on to the jig a little longer," he says. A rod with a sensitive tip and low-stretch line will also help you detect hits.

If fishing slows, a slip bobber and a small jig tipped with a piece of worm or leech can tease out a few hits. "After you cast out, let the jig and float settle for a few seconds and then slowly pull or reel in approximately three to four feet of line, then pause again." Continue this style of retrieve until you have covered the area.

During spring feeding binges walleye are not as selective on baits matching-the-hatch as they in the summer. When spring fishing this season pay attention to water surface activity and look for isolated hatches. If near post-spawn staging areas, these spots might serve as feeding zones for recovering walleye. Fish them with jigs or slip bobbers and live bait.

In the summer, the early stages of a mayfly hatch can produce good fishing as walleye will feed aggressively, competing for the small number of nymphs. However, when large hatches occur lakes can become overrun with food, and walleye tend to become extremely selective feeders. During prolonged, gargantuan hatches it is sometimes best to cut your losses and travel to another lake void of hatch activity.
Anglers need to downsize presentations to fool summer, nymph-feeding walleye. "The particle size of nymphs tends to be a bit smaller than what people think the average-sized, adult walleye is going after. People may be fishing with presentations that are too large or don't mimic emerging mayfly nymphs," experts say. Depending on the species, nymphs can range in size from 0.5 to 1 inches in size. Aside from downsizing lures, anglers also need to fish exactly where walleye are feeding in the water column.

Anglers also need to move to where hatches happen.  "During the mayfly hatch, I find that walleyes are generally up shallower. I have caught walleye in water as shallow as three feet, even on sunny days." When choosing where to fish flats, concentrate on breaks and holes. Walleye always like to have deeper water adjacent to their feeding flats!

Small jigs can be productive if walleye are bottom-feeding on nymphs during hatches. Bucktail or marabou jigs are particularly deadly, as feathers and hair pulsate in the water. This can be the subtle movement that is needed to trigger finicky walleye. Deadsticking a bucktail jig can be effective for neutral or negative mood 'eyes. What this does is give inactive walleye a chance to come over and examine the bait - this may get you a few more strikes on those really slow days.

When walleye are aggressively feeding on nymphs during a hatch in weedy areas, ago-to bait is a bucktail jig in black, with either a red or white strip on the side. In the weedy flats he fishes, Evans aggressively jigs these baits. "This causes the feathers and hair to expand and contract giving the bucktail a life like appearance," he notes.

To fish hatches,   starts with small, jointed minnow baits, fished on a stop-and-go retrieve. It's important to mimic the action of the larva in the water as it floats up from the bottom, so a slow up and down cadence of your presentation is key. If these baits do not produce,  switch over to jigs. Swim jigs and  scale down to using two to three inch grubs with 1/8 and even 1/16oz heads. Work these baits along weed edges and over weed tops, searching for where walleye are located in the water column during a hatch.

Another productive bait to target walleye during a hatch is a weighted, single-hook spinner rig, featuring a small #3 Colorado or Indiana blade. Colorado and Indiana blades allow the lure to be retrieved slowly, matching a nymphs' speed, while producing vibration and flash. Widely used on Lake Erie during hatches, it is often called a mayfly rig.

A more subtle variation of the mayfly rig (resembling a live-bait rig) is a No. 2 or 4 octopus hook tied below a sinker. Tip rigs with a small piece of worm, anywhere from an half to two inches in size.

Dragging mayfly rigs along the bottom or slowly swimming them to the surface will imitate nymph activity. Other elements of the retrieve should include frequent pauses, stalls, and lifting the bait up again. Rigs can also be counted-down to target suspended walleye feeding on emerging nymphs.

During summer walleye feed on vulnerable mayfly nymphs during hatches. Using small baits and imitating a nymph's erratic movements will take fish when traditional baits won't get a sniff. Integrate the above strategies into your repertoire, and you'll be turning mayfly hatches into opportunities for increased catches.